I'm Big in the Philippines

I've come to the conclusion/realization that no matter how hard I try, I will never "blend in" to my new home.

Jing (my wife) is lucky. She blends in perfectly... in fact, she's earned the nickname "Kanto Girl" because of it. ("Kanto" means corner... which is where most of the street food -- AKA "turo-turo" or "point-point" -- is sold).

I can overcome the lanuage, I can learn proper social etiquette, I can learn to love all the street food here, but despite ALL OF THAT, I will ALWAYS stick out like... well, like a tall white guy in a room/street full of Filipinos.

I hit my head on awnings, chairs are usually too small for me, and even when getting my picture taken for "Biodata" (they require 2x2 photos to accompany your job application) I have to crouch down to get into the shot. I had to do the same for my driver's license and NBI clearance... the camera was aimed at my belly button! I barely fit into tricycles, and my head is practically glued to the roof of the Jeepney when I ride. Honestly, I'm surprised I don't have worse posture as a result of public transit.


I'm very aware of my presence... and I expect stares and comments when I walk to the Sari-Sari or am in public places. I'm called "Joe Kano" (a reference to the US military occupation during/following WW2). I'm the minority here, I get it.

You have to get used to being viewed like a sideshow attraction (luckily I used to be in the circus, so I'm accustomed to it!). Depending on where you live, seeing a white person is like seeing a unicorn! Obviously, Manila, Subic Bay, Baguio, and the "touristy" places are full of white people visiting from various countries, but once you get to more provincial areas, it becomes more and more of a novelty. I'll admit, I was on my way to a job interview the other day and saw a white person and thought to myself, "Whoa! What's a white guy doing here?!?!" My first few weeks in the Philippines I didn't see any other white people, and when we went to one of the more famous malls in Quezon City for 'Bert's environmental fundraiser event (See sidebar under "Filipeanut") I did my fair share of double takes! Where I live, white people aren't common at all.

So yes, I stick out.

There are advantages and disadvantages to this, of course.

1) The most notable advantage, I have what I'll term the "Kano Perimeter," (originally known as the "Gaijin Perimeter" courtesy of Az at http://gaijinchronicles.com/). People like me... from a distance. If I'm sitting in a Jeepney, the last two spots to fill up are the ones on either side of me. People love to talk to me, but touching? That's a different story (and you DO touch on the Jeepney. The drivers like to jam in as many people on the Jeepney as possible to get more more money out of the same amount of time. I've been in a Jeepney where there were 12 people on each side, though the seat is only meant to hold 8... I may have unwittingly sired a child or two as a result).

2) People are intrigued by this foreign pale being towering over them, and Filipinos are (in my experience) very outgoing, so it's easy to find someone to talk to or help you (even if you don't actually want to talk). EVERYONE wants to know where you're from, "how do you find the Philippines," where you're going, are you married, and do you have kids? After answering those questions (bonus points if you can do it in Tagalog) then you've got a brand new kaibigan ("friend") to help you out.

3) I can easily see what's happening at the front of a crowd/line even if I'm at the very back.

4) No one asks to have my stuff, because it doesn't fit them. Nobody here wears size 14 shoes, so I have them all to myself. It's fortunate I brought plenty of shoes and flip flops with me, because none of the markets here have anything close to my size (we've even gone to the outlet facilities... to no avail).

5) People remember you. After travelling around for a while, people start to recognize me, because I do stick out. I'm probably the only white guy doing the things I do where I do them. I don't get patted down as often when I go to the stores, because they know who I am. Vendors remember me. Trike drivers come over to shoot the breeze with me in the mornings while I'm out walking. The people who beg on the street don't bother me as much (my heart bleeds for them and I really do wish I could help, but I still don't have a job and the only money I carry is my bayad ("payment") for the Jeepney. I explain this as kindly as I can, and they remember and the next day or next week they don't bother me as much. I used to get asked for money everyday. Now it's once a week, if that.)

1) The "Kano Perimeter" (patent pending) can be a disadvantage, too. I have to make sure to smile a lot. I've become very aware of my facial expressions, because I know if I have a neutral or grumpy face it can be very intimidating for people... especially kids. People get out of my way of me in general... If my expression doesn't look content, they do it in a hurry. It's like Godzilla walking into Tokyo.

2) Forget about being low profile. It's not going to happen. Everyone is going to look at you, and most people are going to try to talk to you. I don't always feel like practicing my Tagalog, but people are so friendly and outgoing, I feel bad about having those "isolationist" moments.

3) I am often at the back of crowds because Filipinos shove past me. I don't know why, but it's VERY common in my experience... McDonald's, grocery lines, Jollibee, DMV... Maybe they think I can't see them all the way "down there" as they sneak past? No clue. And I'm not gonna go all "Kano Smash!" on them. That would be bad form... so usually I just act polite and sulk inside my head, because I don't want to be Godzilla.

4) No one can have my stuff. I can't "hand me down" things very easily, because a lot of things won't fit relatives. Even the stuff that I don't use that much... most of it is too long in the legs or too thick in the chest or something. Things are small here. In the USA I wear size Medium pants/shirts. In the Philippines, I'm AT LEAST and XL (sometimes XXL). And shoes in my size are nonexistant.

5) People remember you. Some days, I don't feel like talking to or acknowledging every single person on the street as I'm walking at the plaza or going home from SoroSoro. But I don't want them to be offended or think I'm a stuck up foreigner or in a bad mood (see disadvantage #1), so I say hi and converse anyway. I figure there are worse things than conversations...

So there it is... despite all my efforts, I will always have the advantages (and disadvantages) of being "Big in the Philippines."

It's All Good in the 'Hood

We're OK here in Binan. The typhoon was very noisy, flooded a few areas and knocked over some trees, but otherwise Binan is relatively untouched. The real trauma is down in the southern part of PI. Latest predictions to my knowledge have been more than 10,000 dead.

That's all for this post. Just wanted to let everyone know we're OK. Go hug someone you love while you can.
Posted by Unknown at 6:02 AM 2 comments: 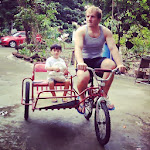